In the 1840s, copper mining became a major American industry. While it originated in northern Michigan, now states in the southwest such as Arizona and New Mexico are the leaders in American copper mining. Other states, such as California, Vermont, and New Jersey (the original site for an unsuccessful attempt at copper mining in 1750), also had copper mines, but those have since closed. According to a U.S. Geological Survey in January 2013, the United States has the fourth largest known copper reserves in the world.

Copper is mainly used in construction and electrical equipment. However, it has many other uses, including as an anti-germ surface in medical buildings, such as hospitals.

Before it can be used in these industries, it must first be melted down to be shaped into what is needed. Copper melting used to be done using fuel-based furnaces until induction melting technology became popular and accessible.

Induction melting technology allows for copper to be placed in an environment with high level of control by the furnace operator. The temperature inside the furnace is very precise. Additionally, copper can be melted using direct heating without the heating component actually making contact with the metal. Copper has a relatively high melting point (1984 degrees Fahrenheit and 1085 degrees Celsius), so a furnace utilizing electricity as the “fuel,” such as the induction furnace, is ideal for copper melting.

Advantages of an induction furnace

Induction furnaces for melting copper can provide many advantages to the metal melting industry.

Manufacturers and foundries can benefit from investing in a copper induction melting furnace. It will create a better workspace with more room and more comfortable conditions for operators, and it also ensures that more time will be spent actually melting copper than operating the machine and ensuring there are no defects. 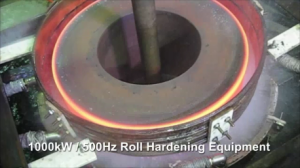